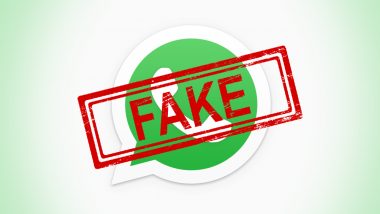 New Delhi, July 3: Recently, a WhatsApp message is going viral claiming that the government will register FIRs against fake journalists and online news portals from issuing fake press ID cards. As per the message, the ministry of Information and Broadcasting will take action against news portal or a newspaper which are not registered with Registrar of Newspapers for India (RNI).

The viral WhatsApp message claimed that Union Minister for information and Broadcasting Prakash Javadekar, during a press conferring with reporters said that the government would initiate action against  people having press ID card of news portals or newspapers not registered with RNI. It is also written in the message that Javadekar stated that people are running a racket of distributing fake press ID’s to people.

However, the Press Information Bureau (PIB) fact check team debunked the claim. The PIB Fact Check tweeted, “Prakash Javadekar has never said that a bill has been introduced in the cabinet to send fake journalists to jail.” It added that the news of FIR against journalists is fake.

Ever since the outbreak of coronavirus in India, social media platforms have been flooded with fake news. The government has advised readers not to believe in such fake rumours and misinformation and visit the official government websites for any such updates and information